This article is about and on the heroic Arab women in ancient Arabia. Many of their stories remain unknown or forgotten with little information available on their life journeys for power and wisdom.

The article is written by Saudi historian and author Dr. Hatoon AlFassi. She was an associate professor and lecturer on ancient cultural history of Saudi Arabia and Arab culture, in Saudi Arabia and Qatar.

Dr. AlFassi argues that there is little known on and about the role of Arab women in preIslamic and Islamic history. In her opinion their roles were either misinterpreted or 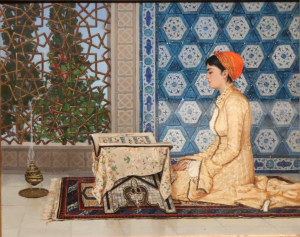 misrepresented. This is true. In Arab societies there are just a few names – such the wives and daughters of  Prophet Muhammed, peace be upon him, known. These have been learned about in school or social religious gatherings. The many others that lived in those times, remain either unknown or little known about. It is unclear as to why.

Therefor, I would add forgotten examples in addition to misinterpreted and misunderstood. There are many special women in Arabic and Islamic history to admire – AlKahnsaa for example. Their lives, like ours today, were filled with struggles, contradictions, confusions and opportunities. Especially in the transition period from pre-Islam to Islam, but also in later transition periods. Being close to the source of the time did not mean automatic awareness to Islam and civilisation. Even then, the natural human process of evolution took take place. It was met with tolerance, understanding, support but also opposition by those who opposed change. to the role and development of women. All what it takes to build a healthy developed society.

These examples is what we Arab women should derive our examples from, can build on our values, and use as our base to build the path forward. There should be more of an effort to find out and understand more about women of our past.