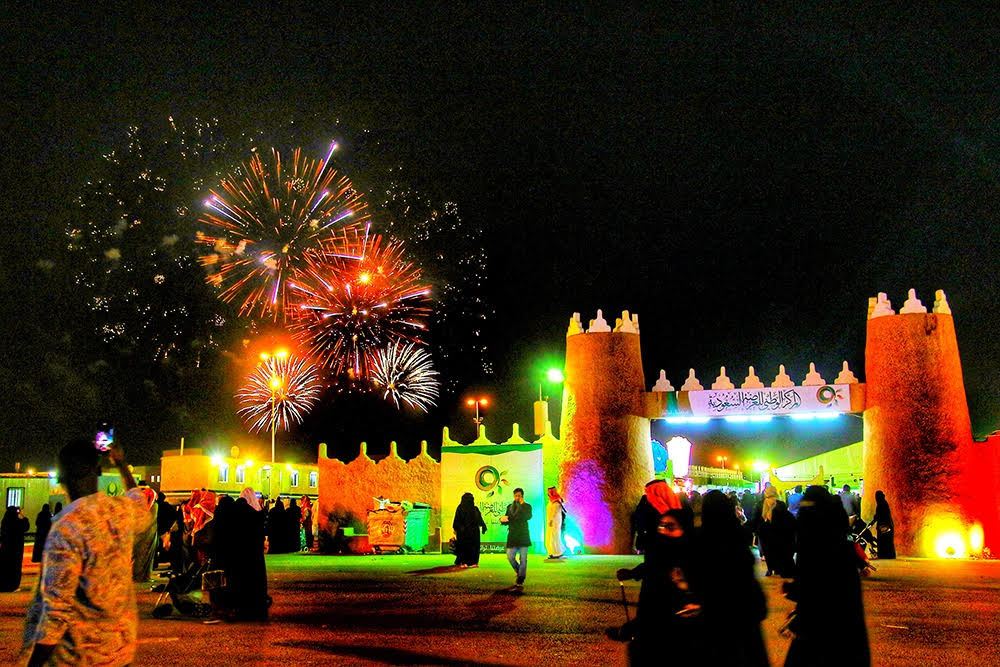 The Asir ‘’Difficult’’ Mountains stand in southwestern Saudi Arabia running parallel to the Red Sea. They cover approximately 100,000 square kilometres and consist of mountains, plains, and valleys of the Arabian highlands, with many possibilities for interesting excursions.

Targeting foreign tourists to Saudi Arabia faces some obstacles that must be taken into consideration by the authorities. On top of obvious geopolitical risks and the occasionally negative press surrounding Saudi Arabia, more specific hurdles lie ahead, including logistical under-capacity, labor shortages, and social issues.

Servicing the tourism sector at a standard demanded by international tourists will be a significant challenge, despite it having a bigger domestic population than neighboring states that are more experienced such as Oman and Dubai (probably a benchmark). Although private and public initiatives to train human capital for hospitality exist – for example, the OYO Skills Institute and Takamul – the dual aims of tripling the number of tourism-related jobs and increasing the percentage of Saudis in them will run counter to each other and require an increase in foreign workers.

The expected influx of overseas leisure tourists has also raised questions about impact and sustainability in Riyadh, notably on the societal level. It should, therefore, not cause surprise that flagship initiatives such as the Red Sea project are located in remote coastal areas away from the local population, raising concerns that the country is implementing some sort of “compound tourism” whereby social and cultural contact can be contained. Another key social impediment lies in more rural areas dominated by tribes, where political support from community leaders will be necessary but could create some limitations in the development of professional services for tourists as tribes will push to keep commercial control over their territory.  The extent to which nationwide reforms will be enforced in peripheral cities therefore casts a shadow on how uniform and welcoming the Saudi experience will be for foreigners.

Implementing this, and other controversial steps, such as the push to permit some businesses to remain open during prayer time, is likely to be tentative and fall short of foreigners’ expectations, since making a blank slate of the long-established norms might meet too much-concerted resistance. While tourism will remain at the forefront of priorities as a key tenet of Vision 2030, the plans as they stand may be too ambitious to be realized in the allocated timeframe. On the other hand, the sector can definitely tap into a strong domestic demand, so that the accelerated development of domestic tourism is the logical and more practical solution.

Although Saudi Arabia accommodates about 15 million international visitors a year, the bulk of them for Muslim pilgrims. Non-religious tourism has largely been limited to side trips after business meetings. A huge training and hotel-building exercise will be required to meet the government’s goal of 100 million domestic and international visitors by 2030, more than double the 41 million in 2018. Even if Saudi Arabia seems ready to become a new tourism force in the Middle East, it still faces many challenges, particularly in terms of political stability. Saudi Arabia must find a strategy to win the confidence of potential international tourists, especially concerning security issues, equal treatment, and a rigid legal system. That is the biggest challenge.

A winning point is that strengths such as the country’s rich historical heritage and the Red Sea’s amazing biodiversity are not sufficiently well known abroad. Even with major investment from the government to promote Saudi Arabia, it will take time for people to change negative perceptions or plain lack of knowledge. 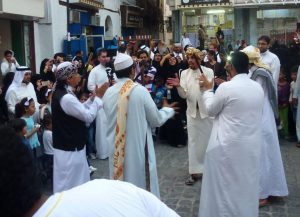 Festivals in Jeddah started in 2007, in which the public were given a chance to see and enjoy local food and entertainment. It was a great experience back then because such festivals were new. Today almost every major Saudi city has its festivals with entertainment, food, etc to attract domestic tourists.

Another key factor is that Saudi Arabia’s strategy to retain Saudi inward tourists and to attract international visitors also means fiercer competition and an eventual redistribution of regional market shares in the long run. Many investors already consider the UAE as a saturated market in terms of hotel supply, with some foreign investors and staff leaving to Saudi Arabia for better opportunities and salaries. This has led neighboring countries to counter Saudi Arabia’s development as a tourist attraction. In July 2020, the UAE announced one of its most drastic steps to limit Saudi from encroaching on its lead in tourism by offering 100% foreign ownership in 122 sectors related to the industry.

The question that interests me is whether Saudis are interested in local tourism or not. As mentioned above, over the years some attempts were made to increase local tourism. Now, due to Corona, people were forced to take their vacations in the Kingdom.

For example, a friend of mine, Manal M. (52), went on a trip to Taif with a few friends, mostly women. They also visited areas further south like Abha, using their ability to drive rather than flying, and found it thoroughly enjoyable. My cousins are making more and more use of the entertainment facilities in Jeddah, where we live, such as visits to the beach, local festivals, driving, and picnics in the sand dunes. Several friends have gone on cruises in the Red Sea, which were particularly enjoyable for their children.

No doubt, all these entertainment facilities have changed people’s lives. Will that stop them from traveling abroad? ‘’No’’, said Hiba A. (38), housewife and mother of two. ‘The freedom I get from walking in Barcelona, Cairo, or Dubai I don’t get here.’’ Nouf S. from Riyadh (45) years says that ‘it is a different feeling. Maybe the feeling at home in Saudi Arabia comes with the social responsibilities imposed on us.’’

In my opinion, tourism in Saudi Arabia will be a success in the long run. Not Dubai-style, but perhaps more like Oman, a bit calmer. Among foreign tourists, religious tourism, in particular, is bound to increase in the coming years. Whether and when Saudis will enjoy more of their country’s touristic beauty may perhaps be determined by the mindset of wanting to escape the Saudi lifestyle with its social responsibilities. 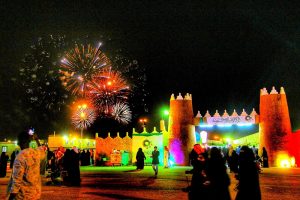 A scene from Al-Jenadriyah festival that takes place every year Riyadh. It is a cultural and heritage festival developed by the late King Abdullah. The festival was first held in 1985 and lasts for two weeks. The idea for it is to become the leading Arab festival that showcases not only Saudi Arabian heritage but also that of the Arabian Peninsula.