The German historian Professor Ulrike Freitag, director of the Leibniz-Zentrum Moderner Orient in Berlin, published her latest book “A History of Jeddah: The Gate to Mecca in the Nineteenth and Twentieth Centuries’’ in February 2020. Speaking about a historical melting pot like Jeddah these days, when immigration, tolerance, and togetherness are more than ever central issues in worldwide discussions beyond countries’ borders and people’s mind, is of special significance. 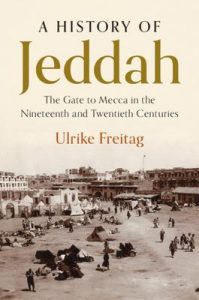 Q: Why is the subject of your book important today?
A: The subject has been always been of importance. The Jeddah experience demonstrates how different communities can live together. The book is a discussion of real-life and integration. I found that this has encapsulated Jeddah society over many years. The book’s core theme is the mechanism of cooperation among and integration of people from different backgrounds that live together in one place. The book also traces how this changed during and after Ottoman times.
Q: Is it mainly a historical book, or a more relevant theme for today? If so, how?
A: You can’t write about everything at one and the same time. For my book “History of Jeddah”, I chose the period from the 1840s until the destruction of the city wall of Jeddah in 1947 as the timeline. I found the end date symbolic because it can be considered as the starting of a new era for Jeddah. I started when Egyptian rule (1813-1840) gave way to a return of more direct control by a reforming Ottoman Empire. This coincided with increased interest in trade and rivalries aiming at controlling international shipping lanes, as symbolized by the British occupation of Aden in 1839. It is in the wake of this increase in international exchanges that Jeddah – like other cities along these trade routes – attracted disproportionately immigrants from the Red Sea rim and further abroad.
The subject is relevant I would say because as a result of this influx, the Hijazi cities formed a very cosmopolitan society. In the history of the city of Jeddah, there have been major waves of different immigrants and influxes from all over the world, although circumstances varied greatly between the older immigration and the current one. With the book “History of Jeddah”, I also want to showcase a Muslim society that managed to accommodate the influx of many different ethnicities, which holds a lesson for present-day Western debates about integrating migrants.
Q: What are the research methods you have used?
A: The research for my book “History of Jeddah” took 14 years (laughing). There were various ways how I got my information: Of course, I used libraries and archives over the years, among them the Ottoman archive, the British archive in London, and the King Faisal Foundation Library (Riyadh), the Dutch Archive when the Dutch Consul in Jeddah gave me access and lots of other useful information as well.
A lot of local (old and new) libraries and archives are still not easy to access. Much information came from local histories and interviews with historians and old families in Jeddah. Here, the so-called snowball system helped, whereby people who have an interest in your work recommend you to others.
There were some families who allowed me access to their family history and archives This way, I got to see a number of merchant documents, some information on Awqaf (charitable foundations) in the city, or materials on the Al-Falah School. There is still a big gap in the research that could not be filled because of the lack of access to the municipal archives. Until these documents are made available to the public we will not know what is in the documents and miss some information.
Q: When people ask you about Saudi Arabia what are the most common questions you get?
A: Questions are different but not really, they usually pertain to the present rather than the past. Most commonly it is about how one can work and move there as a woman. The perspective of people has changed and people are aware of the developments, but it is still hard for them to imagine what life in Saudi Arabia is like.
Q: How do you see changes in Saudi Arabia today?
A: It is much more cautious and aware of itself and the world, as far as I can judge from what I read and people I talk to from and about Saudi Arabia. Saudi Arabia is the biggest country in the Gulf. It is a large country, with a diversified society, political and economic status. There are different regions with different traditions and customs. There are the poor Saudis and the rich Saudis, distinctions most people in the West are not aware of. Nor do people know that Saudi Arabia has a very diverse society with many different concerns, whereas, in the West, there is often focus on a few topics which are seen as symbolic (such as driving or female dress). 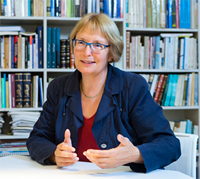