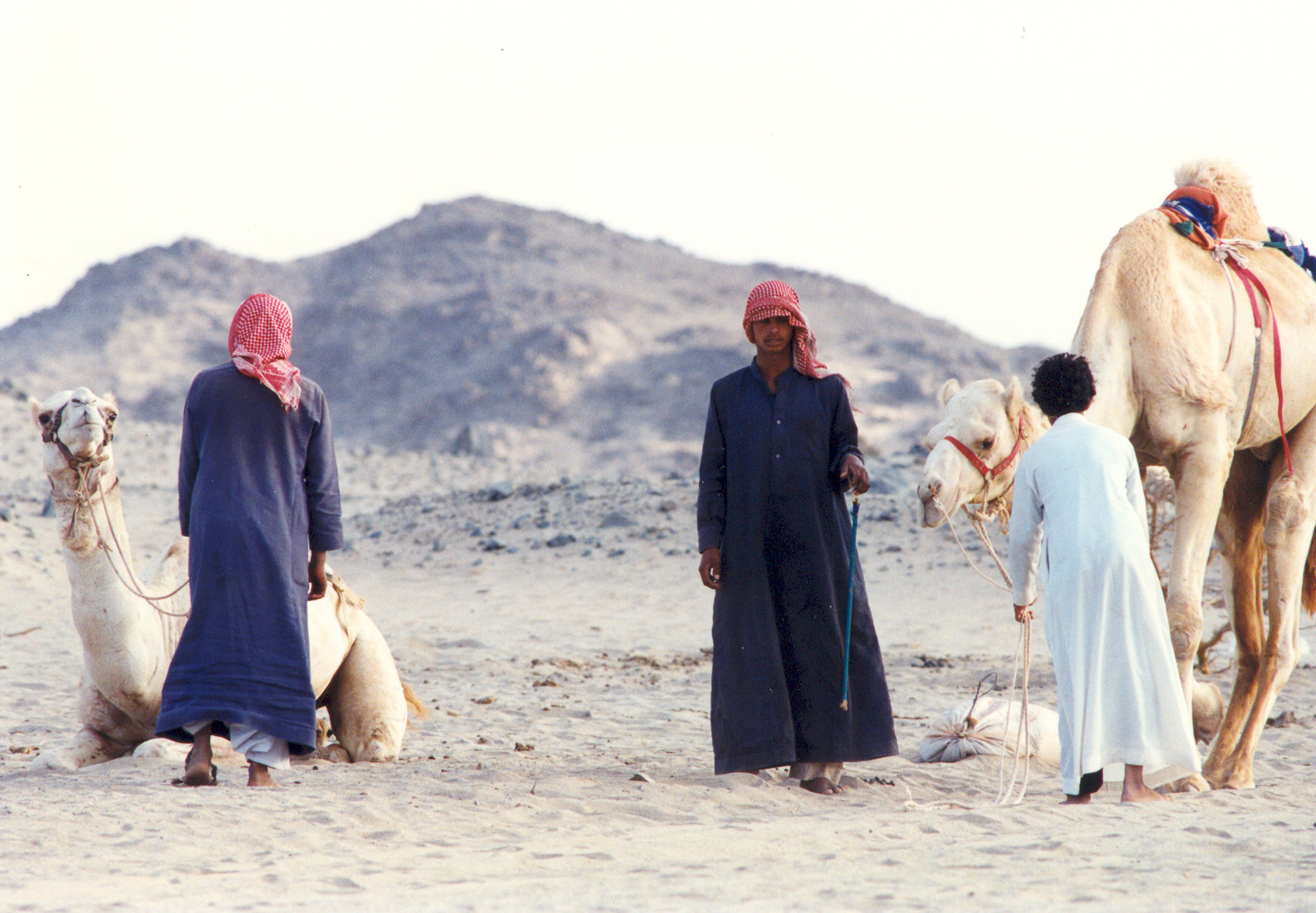 First of all, not all Saudis belong to tribes. For example, people in the Western Province, the Hejaz, from where I come, are mostly not tribal because we descend from people who made the pilgrimage to Makkah and Madinah and settled here, called “Hajj Left Overs” by those who believe they are the real Saudis because they descend from Bedouins. While individual families may play an important role in society in the Western Province, their importance is not due to tribal membership.

Secondly, many people assume that all tribal Saudis are nomadic Bedouin, which was never correct, and certainly does not apply today. The tribes in the south-west of the country, the Asir and Tihama, such as the Shahranis, were always settled agriculturalists and not nomadic. The same applies to the large oases in Qassim and the Eastern Province. Some of the tribes living in those regions, like the Tamimi, were and are large and powerful, but they are not Bedouin.

Historically, the Bedouin tribes were of enormous political and economic importance in Saudi Arabia. They controlled a huge area of land which only they could exploit economically and dominate politically. Even today, more than 90% of the country is desert and not suitable for agriculture. However, there is enough vegetation for camels and goats to thrive. The camel in particular was the basis of Bedouin’s existence, since it does not need to be watered every day and can survive on the most meager vegetation. This enabled Bedouins to live in the harshest environments, but also required them to be on the move to utilize grazing over large areas. Each tribe controlled an area of collectively-owned land, a dirah, where its herds could roam. Some of these dirahs were tens of thousands of square kilometres large, the size of countries.

So, one may ask what the importance of a tribe is? What role does it play in its members’ lives? Is being from a tribe an issue today?

In the old days, to survive in the desert, the solidarity and protection offered to individuals and families by their tribe were an absolute necessity. Tribes or sub-tribes migrated together, looked after each other’s herds, and helped each other in times of need. It also meant that Bedouin were difficult to control by governments because they were always at an advantage in a desert environment. When the Ottomans ruled Western Saudi Arabia, they had control of the cities, but in the desert their soldiers were confined to a series of forts along the pilgrim route, with the open spaces being under the authority of the tribes.

In their set-up, the tribes differed greatly in size and power. Some, like the Anaizah, were so large that they could be properly described as nations, with their sub-tribes forming tribal units in their own right throughout Saudi Arabia, Syria and Iraq. From the Anaizah have descended the ruling families of Saudi Arabia (Al Saud), Kuwait (Al Sabah) and Bahrain (Al Khalifa), as well as the powerful Al Sha’lan family of Syria. Also, almost all thoroughbred racehorses in the world descend from one stallion, the Darley Arabian, whom the British consul Thomas Darley bought from an Anaizah sheikh in Aleppo in 1703. 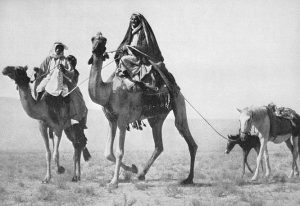 Bedouins at the beginning of the 20th Century.

Next to the Anaizah, the other most powerful Bedouin tribes of Saudi Arabia were the Shammar, Ataibah, Mutair, Harb, Dawasir, Ajman, Bani Khalid and Qahtan. Their rulers commanded large armies of fighters on camels and horses. There was almost constant warfare among some tribes, although there were strict rules that women and children could not be attacked, and that bloodshed should be avoided as much as possible, to minimize blood feuds. On the other hand, raiding each other’s camel herds were so common that one British observer called it the Arabic equivalent of county cricket.

It was King Abdulaziz’s genius to unify the tribes and city dwellers into one nation, through a skilled combination of warfare, diplomacy, and strategic marriages. However, once the country was unified, several developments diminished the Bedouin lifestyle. Through land reforms between 1925 and 1968, much of the tribal lands (dirahs) were distributed to individual ownership. In the same period, the coming of trucks meant that tribal migrations were no longer necessary because one could bring fodder and water to a herd, rather than search for it in the desert. By-and-by, Bedouin started to settle, first in village communities, and later in large cities like Riyadh. This was a gradual process. If you went camping in the desert in the 1980s, you could be sure to pass many tents and for cars to drive past you from time to time. However, by the turn of the century, the desert had literally become empty, with the majority of Bedouin having moved to housing in cities. Nowadays, you must be sure to be equipped to look after yourself in the desert, because you can no longer rely on a friendly Bedouin coming by and assisting you if things go wrong. 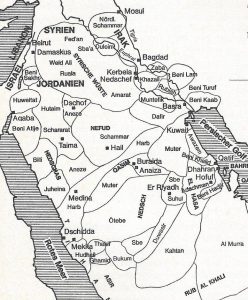 Geographic areas in the Arabian Peninsula.

The senior sheiks of the tribes continued to play an important role in regional affairs since they could rely on the loyalty of their tribesmen. Until recently, the armed forces in particular relied heavily on tribal structures. Being accepted into the National Guard required tribal membership, and senior positions in the armed forces tended to be reserved to prominent tribal families. However, the political power of the tribes has diminished considerably in recent years, since the government control throughout all sectors has increased. For example, even twenty years ago it would have been considered normal for a senior government official to employ only members of his tribe in his department. Today, this is no longer acceptable. Even the National Guard has ceased to recruit exclusively from tribes.

So, what role is the role of tribal heritage in Saudi Arabia, and does it have the same influence as in the past?

Certainly, tribal loyalty remains important in social life, especially in the Central Province, like Riyadh and Buraidah, where many people tend not to marry outside their tribe, and where social status depends on the tribe a person belongs to. This is hardly surprising and quite understandable on a merely human level; members of tribes tend to prefer people from within their tribe or someone from another tribe that is considered of equal status to one’s own tribe. Also, it is considered good form to assist job seekers from one’s tribe – one factor that used to lead to some element of non-financial corruption in Saudi Arabia. Nowadays, with government reforms and awareness of this factor, standards are set for job applicants, who need to prove relevant qualifications and experience, in addition to tribal membership. In some ministries, people from tribes do not hold key positions to avoid nepotism.

A recent phenomenon in Saudi Arabia is the rise of Bedouin soap operas (mulsalal badawi) on television, where tribal life is romanticized, and history is often re-written – just like in Westerns on American TV.

Ultimately, though, for the nation as a whole, this thinking is being pushed to change. While in the past marriage choices, job opportunities and career success depended on belonging to right tribe, today it is more about ability and having the suitable skills to fit and meet demands of the job. 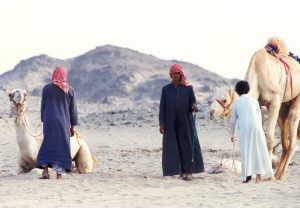 Bedouins at the end of the 20th Century.

Leaders of today’s Saudi Arabia are focused in driving the country’s economy forward, investing in all available resources, most importantly human resources. Looking at Saudi Arabia’s public scene today, it’s multi-ethnic identity is reflected everywhere. Today, being Saudi is more important than what tribe one belongs to.