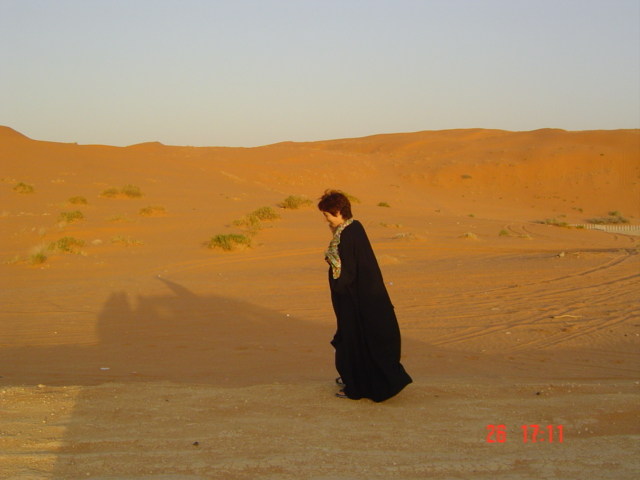 Imbalance Is a by Product for Social Development – Espinosa

Despite her about 40 visits to Saudi Arabia, Spanish journalist Angeles Espinosa, went to Saudi Arabia on her first tourism trip to Saudi Arabia in October 2019. Angeles has been a foreign correspondent for Spanish daily El Pais since 1987 – now based in Dubai and previously in Tehran, Cairo and Beirut. She is specialized in the Arab and Islamic world. 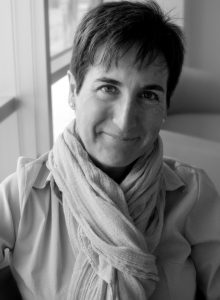 Angeles’ writings are as exciting as the political confrontations of the Middle East/Central Asia; she wrote about the US intervention in Afghanistan, the wars against Saddam Hussein, the Iraq-Iran war, the conflicts of Lebanon, etc. In these high-intense political times, Angeles interviewed many regional leaders including late Saudi King Abdullah, Sultan Qaboos of Oman, King Abdullah of Jordan and other presidents.

Yet, this time her visit to Saudi Arabia was a combination of work and personal joy. With a small group of international journalists, she went to visit touristic attractions in Saudi Arabia that have hardly been visited or known to international audiences and been open up for tourism now. Among them, the attractions were Mada’n Saleh. Probably Saudi authorities did not know that for Angeles listing Madaen’n Saleh was a dream. Otherwise, they may have invited her earlier. She first heard of them after visiting Petra in Jordan before 1987.

Despite the personal joy, she could not stop her from discussing Saudi Arabian affairs. Most importantly, how these changes will be received by Saudi society.

Q1: This visit is part of some fundamental reforms happening in Saudi Arabia. Opening tourism, a long no go. You have known and reported on the country for over 20 years. How do you see the tourism part of these reforms?

A1: My immediate thought was, how will Saudis take the changes that will come through the opening of their country to foreigners?

Q2: How do you answer this question?

A2: It is difficult to give straight-forward answers. Most Saudis have access to are educated people who have always have progressed in their lives, aspiring changes, fighting and wanting these changes to happen. So, now they are ready and happy that they are happening. They have studied abroad, and for them, it is not a problem, but part of life to go to the cinema, for example. My concern is more for people in the rural areas who have no access to modernity and may see this as a threat to their culture. But also in my experience with Saudis, some of the most philosophical discussions I had were with people with a simple background. This time during my visit, I had an Uber driver who was listening to hip-hop music. He turned out to be from Al-Qasim [one of the most conservative areas in Saudi Arabia]. He has a wife and two children. I asked him jokingly whether the music was not haram [religiously not allowed] where he comes from, and he laughed and said it is about time that we [Saudis] change. On the other hand, a friend of mine, not Saudi, is married to a Saudi man. They travel monthly to his village in a rural area,  Hail, to see his family. She gets along very well with his family and is very integrated. During one of her recent visits, she figured out that her sister-in-law, who my friend thought was studying literature, turned out to be studying medicine, but because medicine has training that includes men, her family did not want anyone in the community to know, to avoid criticism.

Q3: Saudi Arabian society is at a turning point. Do you see the process of social change being positive for the reform process?

A3: I put myself in their shoes: Someone comes into my life house and tells me how to live my life better. I wouldn’t like it, even if it would be for the better. The contradictions are the result of the pampering Saudi parents gave their children. The child learns to grow up not carrying responsibility. Freedom comes with responsibility. That is something the Saudi young people will learn along the way. Many of the young men I have interviewed on women’s issues are not conformable with the new role women have, while the ones in their fifties and sixties are ok with it. This is normal, I believe.

I compare my times with their times now. It was similar. I grew up during the Franco dictatorship. When I graduated from university after his time, things started changing slowly. Some people can cope with changes quickly, others can’t cope at all, others take time, and some are completely confused.

Not all people carry the same personal ideas or education or ambitions and therefore will be searching for what they really want. I see this very clearly happening in Saudi society. I mean, if you look at the situation in Saudi five years ago, Saudis were living under strict rules, and three years later all this was over. It is a social process, a process of values. Some people are better prepared to cope with it than others. It does not surprise me that this is causing the imbalance clearly visible among many Saudis.

Q4: Spanish society experienced an imbalance after Franco. Do you see an analogy between the post-Franco times Saudi Arabia now?

A4: I don’t see any analogy there because in Spain the opening up after Franco’s death was political as much as social. However, whenever I observe social changes in other countries, i.e. Saudi Arabia, I get some understanding of the internal social tensions from the experience I lived as a teenager at that time. There was a lot of debate about whether Spanish society was ready for the change (laws of divorce, abortion, equality rights…) What I saw was that a part of it was actively looking for it, a minority was gripping to the old ways, and a plurality just waiting to see how it all developed. In Saudi Arabia, due to the lack of press freedom, it’s hard to gauge the weight of every group.

Q5: How did Mada’n Saleh get on your wish list? 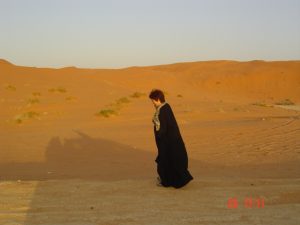 Angeles here outside Riyadh on the way to Fihrayn some years ago.

A5: It was always my dream to visit Mada’n Saleh since I visited Petra in Jordan 20 years ago, even before I started work at El Pais. There was the first time I had heard of Mada’in Saleh. I enjoyed Petra so much that I always wanted to see the confutation o it which is in Mada’n Saleh.

Over the years, every time I wanted to visit, reasons came up that stopped me from going either work or the timing wasn’t right.

In the group I was with there were two Italian journalists, two South Koreans and one Malaysian, all based in the Middle East. We stayed there for about three days. It is an amazing place. I did not expect it to be this huge, because I always thought that it is only one area, but there is so much to see: the landscape, nature, inscriptions in the rocks, tombs. There are about 110 tombs, but we only managed to see ten. They are very well preserved. What I saw was above my expectations.

Q6: In your career, you have received some prestigious awards among them the Víctor de la Serna for best Spanish journalist in 2010 and the prize of the Club Internacional de Prensa to the best journalistic work abroad in 2003. Besides writing articles you wrote books.

My book on Saudi is about the days after 9/11. The original idea the publishers had is to write book that explains the Saudi Arabia of Osama bin Laden to the Spanish public. The Spaniards, like many Europeans, had known very little about Saudi Arabia then. The book ended up me explaining Saudi Arabia to the Spanish people. I wrote the book by putting all my articles together from all my trips to Saudi Arabia and built up all the chapters. It did not cover so much history. I explained the contradictions of modernity, religion in the Saudi society.

Q7: Was the Spanish public interested in reading about Saudi Arabia?

A7: Very well. It served the cause, I believe. It is available as an E-book now. It got reprinted, and I was asked to write an update, but my time does not allow me to take so much time off for such a project. In 2005, when I wrote the book, I did that on my weekends and in my free time. In Spain, we don’t get to take a year or so off to do such projects, like in the US.

Q8: In your opinion do you see tourism affecting Saudi Arabian society?

A8: Saudi Arabia is changing with or without tourism. But no doubt that tourism is going to have an impact. And again, to the extent that other countries’ experiences can serve as a guide, there will be positive changes not only in terms of economic development but also in a more relaxed attitude towards foreigners that with the time may translate to local ways. And also some negative ones, especially if some Saudis perceive foreign visitors as a threat to their traditional values and culture.