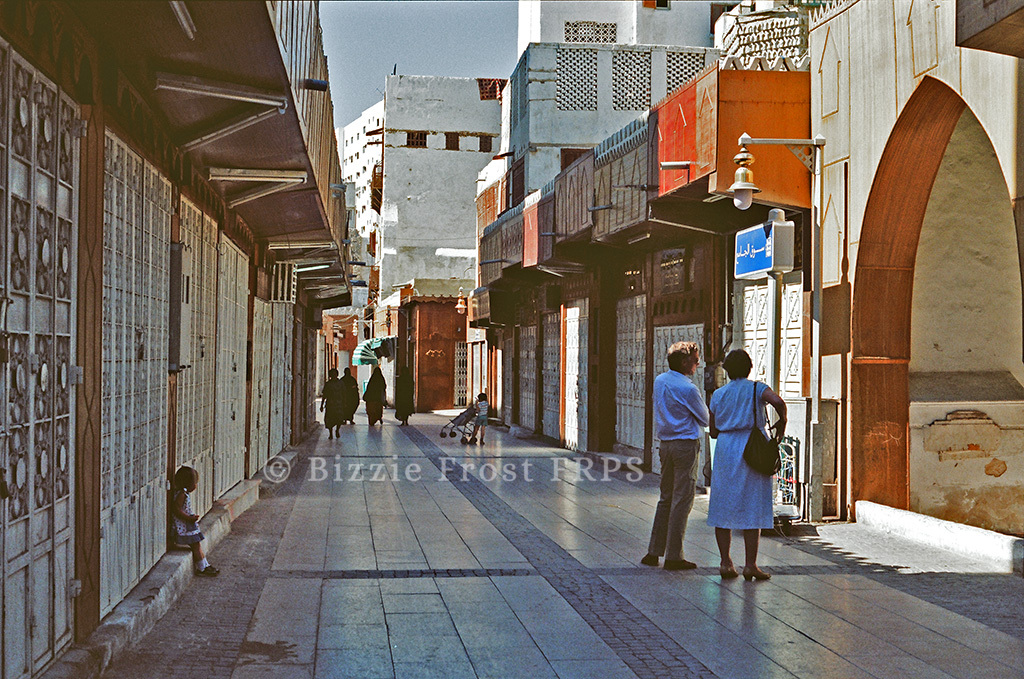 Life in Saudi Arabia Through the Eyes of Bizzie Frost

Q: Elizabeth Frost, known to everyone as Bizzie, tell us something about yourself.

A: I was born in Kenya and grew up in a small town in the heart of the tea-growing district. It was an idyllic childhood, to begin with, in a remote area in a forest where my father was teaching the local farmers how to plant tea. We had no electricity and our light was from paraffin and methylated spirit lamps. A battery-powered radio brought us the BBC news, along with lots of crackling and whistling sounds. Sometimes we connected a battery-powered turn-table to the radio to play the few records we had, one of which was the soundtrack to the musical My Fair Lady. By the time I was six, I knew all the words to all the songs. After primary school and part of my secondary schooling in Kenya, I went to a very strict convent boarding school in Belgium. Following this, I moved to London where I studied to be a nurse. Once I qualified, I returned to Kenya where I met and married my husband, Richard Frost, an airline pilot. 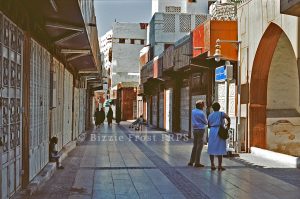 Q: Saudi Arabia then was an unknown country. What the reasons for the move? How is Life in Saudi Arabia?

A: Most expatriates go to Saudi Arabia for one simple reason: money. We were the same. By 1984, we had two children, a son, and a daughter. Because the future for us in Kenya didn’t look too bright, and we faced expensive school fees, we made plans to leave. Saudia were recruiting pilots and offering more than twice the salary Richard earned, so we thought we would try moving there. Richard was told that he would probably only be employed for a maximum of three years because of the Saudization programs in place. We ended up having a life in Saudi for 31 years, and left in April 2015. 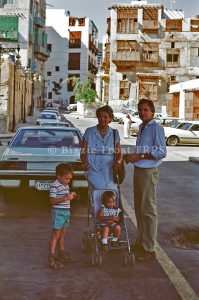 Richard with his two children, and mother-in-law in Old Town Jeddah

A: When we arrived in Jeddah, we found living in an expatriate compound was a greater culture shock to us that the culture of Jeddah. We found it very strange to live in an environment where foreigners were segregated from the local people as we had never lived like this before. This meant that there was little opportunity for us to meet any Saudis. It was even difficult to meet expatriates from the other compounds, so we were confined to living and socializing with only staff employed by Saudia. In the beginning, I was very unhappy living in Jeddah – I was used to leading an independent lifestyle, living in a cottage with a big garden, driving my own car, and having my freelance photography work. I found myself confined to a tiny first floor flat, forbidden to drive or work. I really wondered what I had done by moving there and felt I had completely lost control of my own life. However, we soon developed a great social life among the expatriate community, discovered the beach and activities like sailing, windsurfing, and scuba diving, and went camping in remote parts of the country during the cooler months. Because we lived in our segregated compounds, the expatriates could socialize in their ‘normal’ way, having parties, going to plays put on by the amateur dramatics groups, and attending classical music concerts put on by visiting musicians brought in by the various foreign consulates. Life in those early years, despite having no driver or limousines, was easier in many ways than it was later. Expatriate women were not expected to wear the abaya – as long as we dressed ‘modestly’, we could wear what we wanted. Jeddah was a smallish city – only 750,000 people and had a friendly feel about it. I used to use the Saptco bus to go down to the Old Town, but that was its only route, from Khalidiya to Al Balad, with stops along the way. At Khalidiya, women weren’t allowed to go into any of the shops selling music audio-cassettes – it was thought that music would corrupt us. After the First Gulf War, the atmosphere changed dramatically. We thought it might become more liberal, but the opposite happened. The muttawa came out in full force and were really unpleasant, forcing us to wear abayas, and sometimes to cover our hair. A few years after this, in 1994, I found I really needed to get out and ‘normalize’ again. My children had just started school in the UK so I took time out to attend university in London for three and a half years studying for a BA (Hons) Photography, coming back to Jeddah with the kids during the holidays. It was a tough decision to come back to Jeddah. Once back, I was faced with another unexpected drama and became partially paralyzed after a back operation in Jeddah in January 1999 went disastrously wrong. I was back to being confined to a flat (albeit a much larger one), unable to work, and really wondering how and why this had happened. However, life gradually picked up again, I began writing for the Saudi Gazette once more, doing some photography and learning how to cope with being crippled. The next thing the world faced was terrorism, especially after 9/11. The terrorism came home to roost in Saudi Arabia with bombs going off on a regular basis. Security around all the compounds tightened up, with concrete barriers being set up around them to prevent car and truck bombs from getting to close. Despite all this, we continued socializing and with our explorations around the country – the tension was only really in the major cities, not the rural ones, although some tourists were killed when camping not too far from Madinah. The other thing that we were aware of was all the various wars that kept rumbling between various Middle Eastern Countries – there was always one going on somewhere. Just as we were leaving the Kingdom, Saudi Arabia attacked Yemen, starting a war that is still going on with devastating effects. 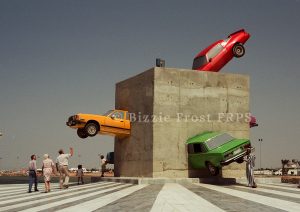 Frost family at Corniche in Jeddah without abaya.

Q: With all the existing obstacles, how did expats build up their “own” social lives in Saudi Arabia?

A: Because we lived in compounds, we could really live the life in Saudi Arabia the same type of lifestyle that we lived back home. When we first arrived, our compound had thousands – perhaps 8,000 – people living in it. As the name implied – Saudia City – it was a small city in itself. We had our own supermarket and a few shops, as well as a fast-food restaurant and café. There were about eight swimming pools, lots of tennis courts, a large baseball diamond, kindergarten schools for the children, school buses to take the kids school once they grew out of kindergarten. Women rode bicycles around the compound, with seats attached for their kids. There was quite tight security at three entrances and Saudis were not allowed to come in. The expatriates had a very active social life, with the consulates playing quite an active role in adding glamour to it. We went to at least three formal dinner-dances a year hosted by one or other of them. The expatriates depended on each other enormously – unlike Saudis, we had no extended family with us, so we all became very close as living a life in Saudi Arabia and looked after each other.

Q: You worked as a photographer in Saudi Arabia for more than 2 decades. Did your work helps to establish a network within Saudi society?

A: My work as a photographer began in the compound, photographing children, which was my specialty. I then found work with a local studio that needed female photographers for Saudi weddings, as well as for some school photography in Saudi girls’ schools, and other jobs such as Royal children’s birthday parties. I felt very privileged to have these experiences and see inside the Saudi community. However, rather than finding a network within the Saudi society, it was the expatriate community who were fantastic for networking and most of my work ended up coming through the expatriate business community. Perhaps I didn’t explore building a network among the Saudis sufficiently, but I always felt very ‘outside’, it was an ‘us’ and ‘them’ atmosphere. Saudis and expatriates very rarely socialized together and, if they did, it was usually at one of the Consulates. When I began working for the Saudi Gazette as a freelance journalist, this gave me more opportunity to meet Saudis, as over the years I had several interview columns. If ever an opportunity arose to interview a Saudi, male or female, I always took it. I remember being surprised at the beginning at how at ease men were with expatriate women. Because of the gender segregation in the country, I had expected something different, perhaps a colder reception. I heard it said that expatriate women fitted into their own ‘third gender’ as we came from a society where we were used to socializing and working among men. Whatever contact I had with Saudi women, however, never led to any real friendships where we would hang out together, or meet up for a coffee, or visit each other’s homes. It was only many years later when an American opened an organization called the Jeddah Cultural Exchange Centre and this would host social events that included Saudis and expatriates. The time when we really had an opportunity to spend time with Saudis and network with them was when we bought a Harley-Davidson motorbike and started riding out with Saudis from Jeddah and Riyadh. We really enjoyed finally having this connection – but still, we never went to each other’s homes in the way that expatriates did in their social life. 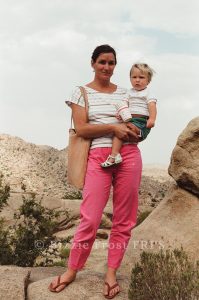 Bizzie with her daughter in Taif countryside, 1985

Q: Recently you have published a book. Is it on Saudi Arabia? If yes, can you tell me the reasons that made you write the book and what it is about?

A: My book has not yet been published – I have an offer to publish but there is still some more work to be done with the editing. I am hoping to have it out by the end of 2020. The book is a memoir of my years spent in Jeddah and my personal journey from the beginning, when I hated being there, to the end when I had developed a far deeper understanding of the country, had traveled extensively around it, became fascinated by it and had grown to love some aspects of it. I decided to write it because so little is known about what Saudi Arabia is really like to live in. Also, whenever we were out of the Kingdom on holiday, all the people we met were hungry to hear about our lives there – they would ask non-stop questions. I feel there is a gap to be filled in the books that are available about the Kingdom. The country usually gets bad press, and you cannot avoid mentioning some of the negative aspects of it. However, the world also needs to know the broader, positive side to live there. 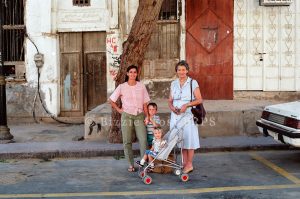 Bizzie with her children and mother in Old Town, Jeddah. 1985