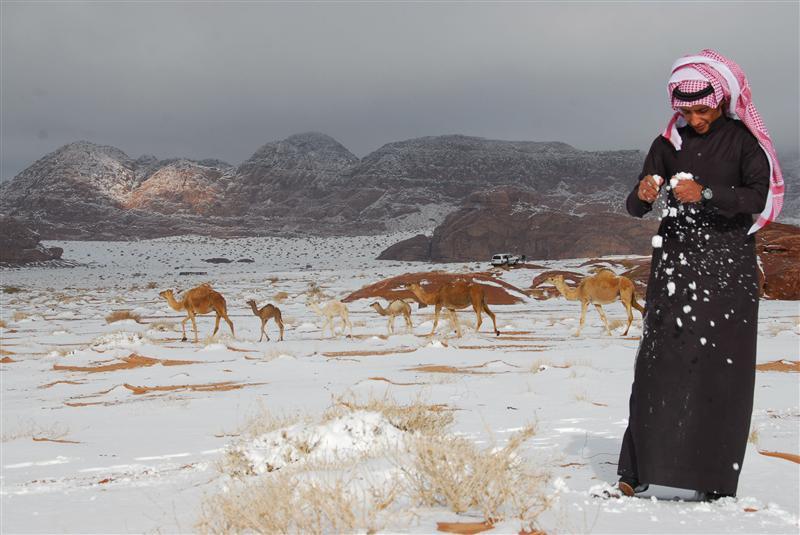 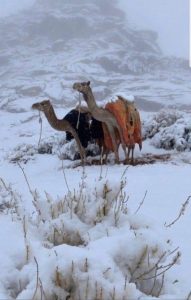 Camels in blanket in white Tabouk

The pictures above show the Dahr mountain in north of Saudi Arabia. Most parts in this area, which includes Hail and Al Jouf, are covered by snow in winter.

Most of the central and northern parts of Saudi Arabia go through harsh, cold winters. Most people living abroad do not know about the seasonal weather changes here, and that it snows in Saudi Arabia.

People always say to me “Ah, you are from Saudi Arabia. It is very hot there, right?” Well, this is true for some regions: high temperatures, huge deserts, camels, are all associated with Saudi Arabia.

Little is known about the weather or the diversified geography of Saudi Arabia. Diverse terrain and its features give Saudi Arabia a diverse climate that varies one region from the other. It mainly has hot summers and cold winter in the central regions, while rainfall occurs in the winter.

The country’s area is about one-fourth of the United States, and roughly the same as Western Europe. It is the largest country in the Arabian Peninsula and lies at the crossroads of Asia, Africa, and Europe.

The diversity of climate comes from its different geographical sites: two long coastlines, one 1760 km long on the Red Sea, and another 560 km long on the Arabian Gulf. Saudi Arabia’s Red Sea coast has some of the most spectacular and unspoiled coral reefs in the world.

In the West and South are the mountain chains of Hejaz and Asir, with some mountains as tall as 2000 meters. The upland are often covered with snow in winter and experience severe storms. The extreme cold temperatures have increased in recent years.

About 90% of Saudi Arabia is desert, with the famous Empty Quart (Rub Al Kahli) in the South, the largest mass of sand in the world. The other famous desert, An Nafud, lies the North. Some sand dunes in Saudi Arabia’s deserts easily top 100 meters in height. If you follow Dakar Rally 2020 on YouTube, you can see breath-taking desert scenes. https://youtu.be/2J5eQ9tTreg and https://youtu.be/A0VR1d7N-7U As you can see and hear, the country’s beauty is much appreciated by the contestants.