A Kind Gesture Comes of Age

JAC (Jeddah Autism Center) celebrated its 25 years anniversary on April, 2nd 2019. At that time there was little awareness and acceptance of autism in society. Today, it is a different picture.

In 2009 I visited the JAC at its first location. The center was located in a small villa with less than 20 staff members. There, I met with a handful of employees from the JAC and administration staff from the Al-Faisaliya Welfare Society. The atmosphere was full of enthusiasm for the new project, as it was the first of its kind in Saudi Arabia with huge demand. But the plan seemed to be incomplete at that time; it was not fully organized and many questions such as resources, educational system etc. seemed to hang in the air.

Today, it isn’t the same. JAC is a fully integrated center with specialized staff that took me on a tour through the center, telling me proudly the story of their development in the last 10 years.

JAC is one of the most important projects of the Al-Faisaliya Welfare Society, a non-governmental organization that operates from Jeddah and has branches all over Saudi Arabia. Its importance is due to JAC being the biggest autism center in the Western Region, with most students and the most modern educational system. JAC’s mission is to support and develop the abilities of autistic children to take care of themselves and achieve independence for a life on their own.

How it all started?

The idea for JAC in Saudi Arabia came from a Kuwaiti lady, Samera Alsaad. In 1999, Mrs. Alsaad was searching for a school for her autistic daughter. When she couldn’t enroll her in any school, she decided to educate herself on autism and traveled all around the world for her purpose and later set up a center in Kuwait. Following the success in Kuwait, she decided to create awareness on autism and traveled in the Arab region to set workshops and help set up similar centers, especially in the Gulf region.

Until a decade ago there was barely any understanding of autism in Saudi society. Parents with an autistic child either did not understand their child’s condition or didn’t go to the doctor because there were not enough specialist physicians to diagnose autism. Some families preferred to send their children abroad for education, out of shame and embarrassment facing society with an autistic child, or because their child had severe autism which the parents couldn’t handle, or there was no center to accept them. For those who couldn’t afford that, their children had to leave school at a certain stage or had no schooling at all. All in all, the situation was stressful for a family with an autistic child.

Younger generations of parents raised the number of families seeking help because they understood better that they and their children needed professional support. As a result, the number of children enrolling in JAC increased, and more classes and teachers were needed. More people meant a bigger place and the welfare society move to a new and bigger location.

Support and Development Go Together

In the meantime, corporate social responsibility (CSR) developed as a basic part of Saudi companies’ strategy over the last decade. Thanks to increasing CSR activities, there was sponsorship for programs, presentations, and workshop. The new building was put up by Saudi Arabian Basic Industries Corporation (SABIC), who manufactures diversified chemicals on a global scale.  Another big sponsor is the Al Olayan Group, a private multinational enterprise, which sponsors training programs for teachers.

Another party involved is the Saudi government represented by the Saudi Ministry of Urban and Social Affairs which supports JAC by paying fees for Saudi students and is also responsible for administrative affairs of charities to make sure they follow the government’s strategy for charities.

JAC is Open For Everyone

Despite JAC’s success story, it was near to closing its doors to the children a few years ago. When the Saudi economy went through tough times while restructuring, no one was willing to donate. The government also reviewed its expenses, while the business world did not know what to expect in the future. Many charities had to reduce their activities or close their doors. But with the Saudi economy picking up again, and the government setting clear lines for its role with charities, things today have changed to the better.

Also, JAC is open to non-Saudi children, who, unlike Saudis, don’t get their fees paid by the government. In cases in which families can’t afford paying fees, the center helps to find suitable donors.

JAC’s main goal is to give autistic children the ability to have a normal life, ensuring a prosperous professional and personal future in which they can lead independent lives. JAC provides education in reading, writing, sciences, and humanities. It has ongoing tests for its students through which teachers can estimate the child’s development and adjust the teaching program accordingly. Besides education, teachers at JAC teach children to learn to deal with their reactions which are very important for integration into society.

Each child gets his or her own training program based on the stage of IQ, needs, level of abilities and skills. In the first three months, a child stays 3 hours a day at the center for training skills and increasing social interactions.

Boys leave JAC at the age of 16, and girls at the age of 18. At this stage, a child, whether boy or girl, will have completed his or her basic education. The next stages are vocational training for the students either in government institutions or private enterprises.

Although a lot of work is done, a lot more still needs to be done. Many little obstacles still remain that are essential to the success of JAC and the children’s benefit. The supervisor told me that one big problem they face is the long waiting lists. Because of limited technical resources, not all children can be accepted at any one time. Another problem is finding qualified teachers who are willing to take such a huge responsibility. The strong training programs teachers receive made many qualified teachers leave the center and establish their own autism centers in Jeddah or other cities in Saudi Arabia.

JAC Guide at Home as well

JAC became a role model for other centers in the region for its scientific cultural training programs. The center’s points of strength are the educational, social and psychological programs it provides for the children.

Home care is the more important part of the healing of an autistic child as home implements what the child learns at school. It is important for a child to have stability and routine. While school is about development and skills, home is to secure routine. This helps the child create an understanding of social systems, through a stable rhythm and living within set boundaries. This requires lots of discipline and effort from the mother because an autistic child has difficulties understanding instructions. This has in most cases huge psychological impact on the mother.

In Saudi culture, the concept of accepting the other remains a problem. An autistic child appears as a normal child with improper behavior and is not seen as handicapped. As a result, some parents do not dare to go out with their children out of fear of being embarrassed by their child’s behavior in public.

The role of the father is usually limited and not involved in the upbringing of the child. In some cases, the father does not even want to accept that his child is handicapped, and, therefore, doesn’t follow the instructions for the child’s upbringing. Another burden for the mother is that in many cases she can’t rely on external help – grandmothers, aunts – as they have little understanding of autism or lack of knowledge of how to deal with autistic children. Most mothers see themselves as the reason that caused her child to be autistic and search for the reasons within themselves. Here, JAC offers specialized training to mothers of children with autism to help them overcome the psychological impact. The JAC team admitted there is more that can be done such as follow-up but can’t be done due to financial restrictions.

So, what is JAC’s resume after 25 years supporting autistic children and their families? Among the achievements which JAC sees is merging autistic children into regular schools. Many local and international schools in Saudi Arabia now allocate spaces for handicapped children. Those schools must have special facilities that fit the needs of these children. JAC is proud that so far 9 out of 33 pupils have been merged into regular schools.

For children who do not get enrolled in regular schools, they get vocational training and learn craft skills according to their preferences and individual tendencies. In addition to some academic education, daily life skills, self-help skills, community skills. Some autistic children are gifted with one skill that he becomes almost perfect that gives him or her a big chance to find a job that fits the talent. Part of the social responsibility of companies is to hire handicap people.

Despite all efforts, lack of awareness and acceptance by society remains a challenge for JAC, and autism in KSA generally. Understanding of autism leads to acceptance, and people getting involved in teaching, volunteering and contributions will increase this. In my view, how a society deals with fringe groups and the disadvantaged is a major marker for the maturity of the society itself. Consequently, it is not only the JAC that faces a lot of work, but Saudi society itself. 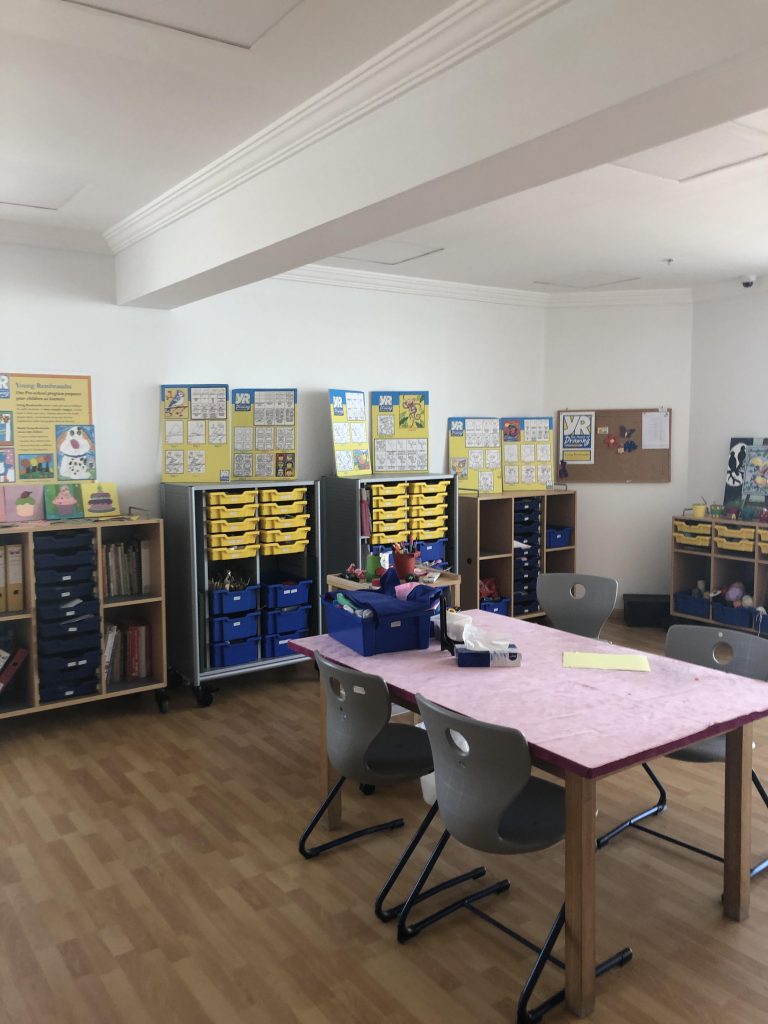 Colors of all classrooms are in blue, yellow and white, the official colors for autism.