This month, I came across a book on my shelf that I had bought many years ago but never read. It is called “Saudi Arabia: Biography and Nation”, written by Abdulaziz AlKhedir. The book is only available in Arabic, no English version. I found this book very informative on Saudi society and would like to share it with my readers. 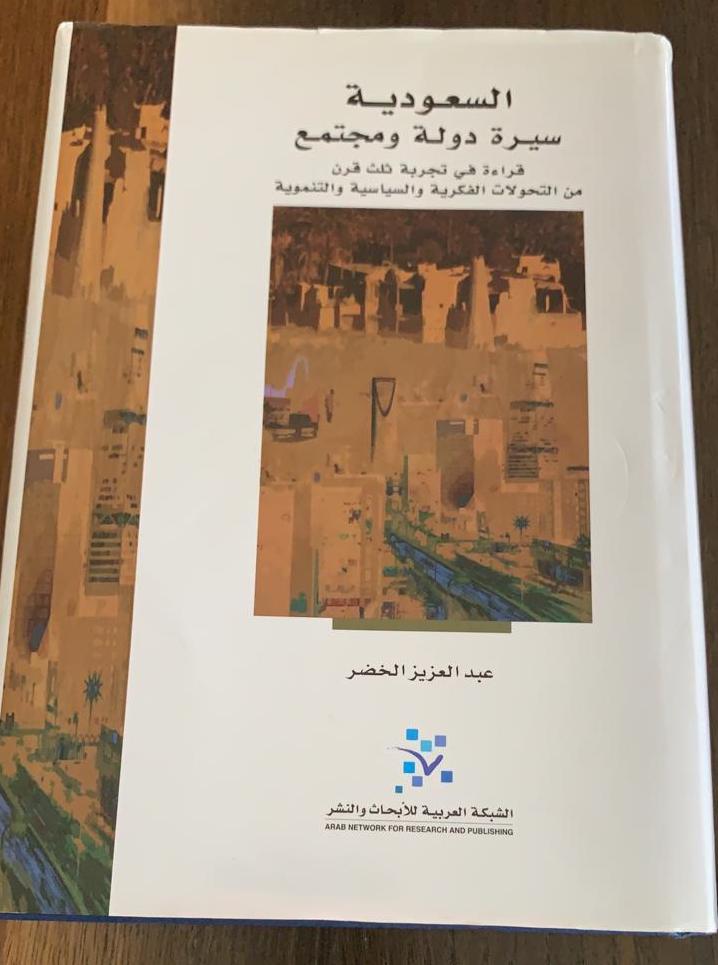 The book covers the development of Saudi society from the oil boom of the 1970s until 2009. My ex-boss used to tell people when describing the history of Saudi Arabia that they were “a bunch of Bedouins in the desert, who, with the oil boom, went on a 5-star rocket tour, came down to find the Makkah siege by Juheiman, and went through a dark period until satellites television came through the Gulf War.”

I began reading the book trying to understand the origin of the current developments in Saudi society.

The first part of the book takes readers through a detailed observation of Saudia Arabia’s and the Saudis’ life and conduct from the beginning of the oil boom in the 1970s. The author analyses and looks into the details of the local Saudi scene and its development. The in-depth insight into the system of Saudi society explains how Saudis were and became, and how they are today. Although, as a Saudi, I always had a good idea of how Saudi society functions, I must admit that reading this book helped me to connect the dots.

The second part of the book deals with the religious mentality, sources, and influencers, their development through history and effect on Saudi social life. It explains the basic components on which the Salafi/Wahhabism ideology was based. Alkhodeir also presents the development of speech, the effect of innovators and also, most importantly, it analyses the thoughts of the most important religious Saudi and expat thinkers.

He begins by explaining the factors and reasons that have formed Saudi society. There were many that affected and caused Saudi society to be in a state of confusion and lack of awareness. In addition, he explains the characteristics of political and social formation of government and instruments of social settings.

One very important fact, in my opinion, is that in Saudi Arabia, there was and is no internal culture of reporting or documenting the development of society and related issues. The media, the main source of forming public opinion, did not offer professional solutions of Saudi Arabia’s ongoing problems. Therefore I believe that these deficits resulted in not recording the experience of Saudi society and intellectual direction, confusion, and uncertainty.

This does not mean there was no documentation on Saudi Arabia at all. The author divided external documentation by foreign historians into two periods;

The alliance between the Al Saud and Wahhabi clerics is widely known. Yet the interaction between the two partners remains unknown to many Saudis. This is my experience. The many Saudi tribes were united under the umbrella of Wahhabi thinking. This came after uniting the many cities of Saudi Arabia with their different cultures and influences through immigration, which explains the variety of traditions and role of religion between different society layers in Saudi Arabia. This alliance created an uncontrollable fusion between the role of society and government, it overlapped. This point I will come back to later.

Tribalism – as defined by Alkhodeir – is a social, political and economically organized system in the Arabian Peninsula and that gains its power by tradition, while the role of government is to balance the different sides of society and religion, stabilizing the country over the years.

It is important to note that Saudi society is made up of three groups:

Looking at Saudis’ behavior and lifestyle, the outside world tended to be confused by a society that is highly modern, yet its lifestyle and its mentality are on a more simple level.  This, in my experience, was the most difficult answer to be given when I had to explain Saudis. The main reason for this is that Saudi society shortened the five stages of economic development into two, from living in poverty to a high-quality, sophisticated consumerist society, but this description goes for most Gulf societies. In my opinion, the outside world connected wealth and knowledge go hand in hand, they don’t. Oil was the source of money but didn’t help in the development of society. So, what happened is that the oil boom in the Seventies transferred Saudis from a Bedouin mentality to a modern society in their lifestyle without altering their thinking. Development was mainly seen in the fields economy, industry, education, health, and infrastructure.

All this happened under and in accordance with the strategic development plans of the government that fulfilled its political, religious and media standards. The author points this as a very important factor as it is repeated many times; there were few other sources of information for society. In a period of three decades, there were no independent media sources reporting on Saudi society, and thus little opportunity for those at odds with governmental policies to express their views.

He continuous explaining that in Saudi Arabia there were three types of speech that shaped public and social life:

This caused the government to be seen as society’s benevolent caretaker, like a gentle mother.

Of course, modernity brought about some change. With time, society became less naïve, influenced by those who went abroad on scholarships, traveling as tourists and mixing with the many expats who came to the country. However, even the benefits of such exchanges could not remove traditional perceptions. Society’s attitudes were affected from outside but not internalized, mainly because the social exchange was not encouraged.

This resulted in social oppression, how individuals were conditioned to conform to the existing traditions and values. And created what Saudis call the “duplicated personality”, a phenomenon of a person who has two personalities in one. I believe this is the right description for the majority of Saudis, degree levels vary depending on background and family structure.

The true explanation, in my opinion, is that this was the result of development that happened in a very short period of time with no intellectual speech. Duplicated personality became not only a way of living over the years but also a survival method to overcome contradictions between what is being practiced and was said. It is acceptable in society until today.

In the coming years as described in the book, Saudis lived in the frame of religion as their frame for their identity. This changed with population growth and economic pressure. Saudi leaders had to create new sources of income which required diversity in the economy, inevitably leading to a demand opening up society. Today Saudis are experiencing a new lifestyle that would have been unimaginable six years ago. Chances for Saudis are opening through economic evolution away from religious suppression. With the opening of life in Saudi Arabia, the young generation will be unlike to go on with the same pattern their parents lived by. They have been finding their ways exploring, trying, experimenting and adjusting their lives to become better. And although it is a liberating lifestyle, it is confusing, believe it or not. The old, much disliked, the dichotomy is gone, but what now? What is the frame of reference for Saudis?

So what is now? In my opinion, the collapse of the alliance between state and tribesmen is a transition to state capitalism. It is a period that will be chaotic because it will be full of change, developing a new lifestyle, adjustments and search for identity. The glue will be nationalism. Saudis feel united because they suffered equally, and if they stick together, they trust that they can do better. It is important for today’s young and coming generations to find their identity, and the government carries a big responsibility. Opening doors, creating opportunities is key – in support of the government. Big companies create ecosystems for startups by innovation and putting the right person in the right position. Saudi Arabia may be a startup now.

I think that this book is a great analysis for the description of nature and the factors influencing Saudi society and its development. It is a great help for understanding the origin of everything that moved and shacked until 2009, which is very important to understand Saudi society today.

There is the religious mentality that I may or may not discuss in another post.

I rediscovered the book, but unfortunately, I haven’t discovered the author yet. He is a historian sociologist and columnist in several Saudi newspapers. His last online appearance in media was in 2017. My search is still going on.