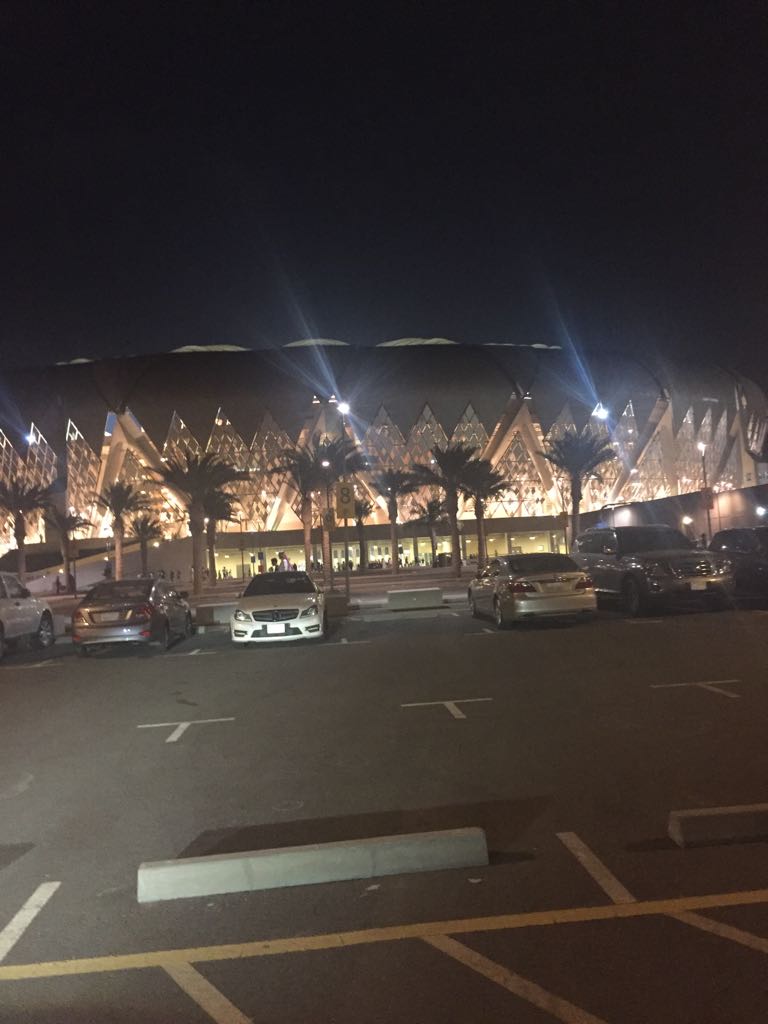 The many royal Saudi decrees announced last week made some wonder if this is still Saudi Arabia. The latest is that the Kingdom is to host the first Arab Fashion Week in Riyadh this month. All announcements reflect the government’s efforts to reach economic prosperity through implementing proper social freedom. Not only to gain economic growth but also to give the stolen rights back to the society.

Historically, Saudi Arabia has always been considered a male dominant society. Today, in another step towards women empowerment, Dr. Tamara bint Yousif Al-Rammah was appointed Deputy Minister of Labor and Social Development. In addition, not only can women work as security personnel in the military now, but enrol as soldiers if between the age of 25 years – 35 years old.

These announcements are a cultural shock to anyone over 35 year of the age. It truly is as stated in an article in The Washington Post published last month, “The crown prince of Saudi Arabia is giving his country shock therapy”.

The Saudi Arabia of today is functioning properly. In the past, a few reforms by the government were announced whenever a reaction to a crisis made it unavoidable. So, we Saudis got used to hearing good news, living a few moments of hope, and then coming back to the harsh reality.

Now the reform process seems to be never-ending. Therefore, it is understandable that Saudis find it difficult to believe what is happening. Now they are confronted with a long-term vision that truly seems to be in progress. One example is the Citizen’s Account. When electricity, fuel and water prices went up, the government created the Citizen’s Account to help families with lower income in this transition period. The project is effectively functioning since its launch.

This change is real

Two weeks ago, I went to the stadium to watch a football game in Jeddah. It’s the King Abdullah Sports City, also nicknamed The Shinning Jewel because of light reflection from inside and outside the stadium. The stadium was opened in 2014 and has far greater capacity for 62,200 spectators compared to the old Prince Abdullah Al Faisal Stadium with capacity of 27,600 south of Jeddah. The two local teams of Jeddah, Al Ittiḥad and Al Ahli, play their games in this stadium, in addition to other national games. It is located on the way to Rabigh, 60 km north of Jeddah.

The weather that evening was nice. Until this moment, I had never given thought to what all this means to me. I was just happy to see my team, and happy to be soon able to drive to the beach on Friday, neither needing my husband nor my driver.

As we crossed the entrance, I started to feel weird – girls wearing Al Ittiḥad shirts; wives hand-hand with their husband, some faces covered wearing the Ittihad scarf around their necks over the Abayas. My sister, my brother and I, all walking up the stairs of the stadium to watch a football game. Oh my God. This is very real. I had to hold on and slowly allow this reality to sink in. My brother and I always had endless discussions about football. Luckily, we support the same teams, and have been to a few matches around the world. But seeing Al Ittiḥad together, playing in Jeddah, was a very different experience. This is home, this is us, this is Jeddah. Today we will watch and discuss together in the stadium. The new wave of Saudi decrees has indeed created a changed lifestyle. 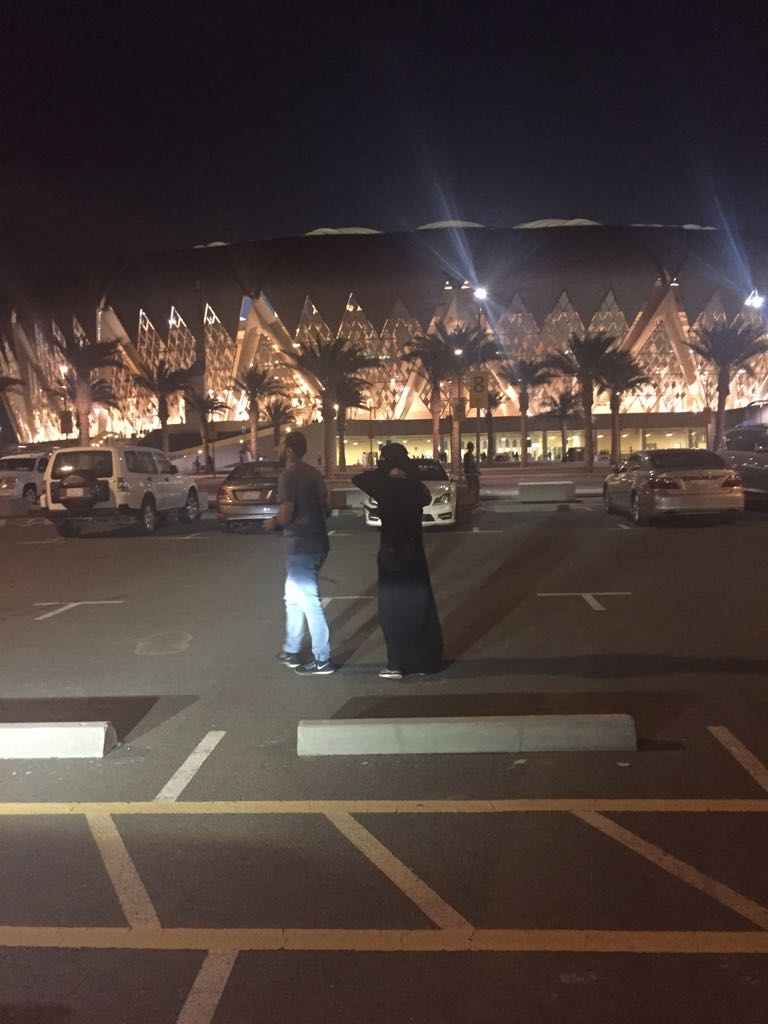 Saudi decrees: A Saudi couple walking outside the stadium ahead of the game.

At the entrance women must go to the female entrance (women and men have different entrances for security checks then get back together once inside the stadium), ushered by female security staff that wear yellow vests over their abaya. At this point I started to believe that this might be Saudi Arabia. Both male and female security staff was professional, cool, open, talkative, and helpful – not traits commonly associated with Saudi service providers.

We sat down, I looked, and saw the familiar yellow and black Al Ittiḥad colors everywhere. I saw the screens, players warming up. I saw what I usually see on TV, but today I am here with my team, among my people, living my passion for football in my hometown Jeddah. No, I still can’t believe it, I need to come here more often.

I grew up in the eighties. The simplest way to describe them is the dark ages of Saudi Arabia. As MBS described them, 30 years of backwardness. In those days, entertainment possibilities for Saudis were almost non-existent. There was the exception of expatriates creating their own scene in their gated compounds from which Saudis were barred by the government. We could visit each other, eat, talk, listen to music, but women were not allowed to enter record stores to buy music. Satellite television was not available, and no one wanted to watch the two Saudi TV channels. We would go to the supermarket to buy magazines – which were 3 weeks old with half the pages torn out, or the pictures of women blacked out. Women were not supposed to be seen. Also, if we wanted fast food, the driver had to get it for us. As mentioned in my post “The Makkah deal and its impact on Saudi society!” MBS promised “I will return Saudi Arabia to moderate Islam.”

The stadium experience wasn’t the only one that shocked me. I now see women working in public, side by side to men. Saudi Arabia and Saudis have transferred to another level of social, mental satisfaction. That is undeniable. The atmosphere in Saudi Arabia has changed tremendously due to Royal Saudi decrees. 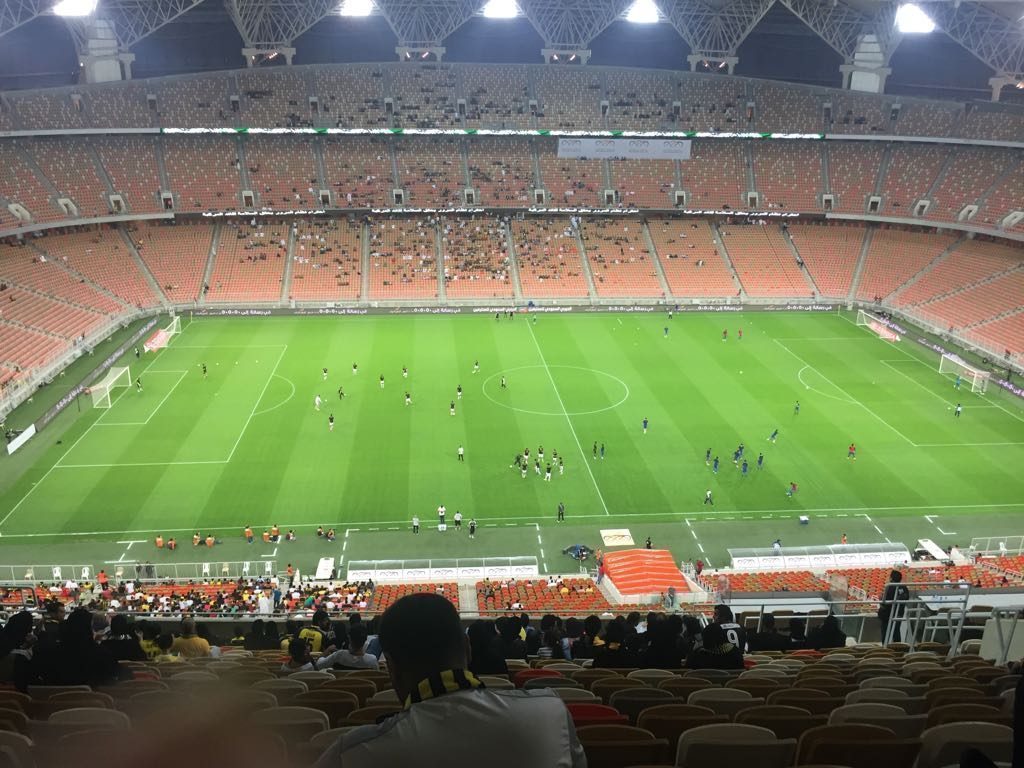 A view from the family section on the pitch.

During my work at SAGIA – the investment authority – I was, like all my colleagues, always stopped by the social boundaries that hindered attracting investments to Saudi Arabia. Investments that could create jobs bring income and resources of Saudis. Easy steps that will improve Saudi Arabia’s economy. It seemed so impossible, unrealistic although it was clear how necessary it was.

Today all what we hoped for is happening. Saudi Arabia is not walking but running towards development. An ex-SAGIA governor used to describe Saudi Arabia is a crab shrimp that takes one step forward and two backward. Now we move forward.

At home, my life passed like a movie, reflecting Saudi Arabia as it was and how it is today. My generation would never have thought this could happen. The atmosphere of oppression was looming in our heads, social and work life. It was felt inside houses and outside on the streets. Change seemed impossible, not allowed and difficult to implement.

The future looks bright for us, thanks to the new Saudi decrees.

Today everything seems possible. There is a plan, which makes sense, long-term and efficient. Before, all the plans were short term reaction to low oil prices like creation of SAGIA or never implemented like the so many 5 years plans by the Ministry of Finance which never got implemented but regarded as the vision of Saudi’s economic reforms.

So now like many who believe in progress I must get used to the new real open Saudi Arabia. Never thought it would be so strange but it was a great feeling to Saudi Arabia heading where it can head.

More on the Saudi decrees here.